Join us for a silent auction and presentations at our annual Wright Brothers Celebration on Thursday, December 17, 7:00 PM.

We will start by welcoming members from our sponsoring aviation groups from the Delaware Valley: The Aero Club of Pennsylvania, Angel Flight East, EAA Chapter 240 and The Eastern PA Chapter of the Ninety-Nines. The Aero Club will invite all to participate in an online silent auction to raise funds for aviation scholarships. Finally, we will welcome our exciting speaker for the evening, Martha Lunken. Martha will tell stories until about 8PM, followed by some Q&A. 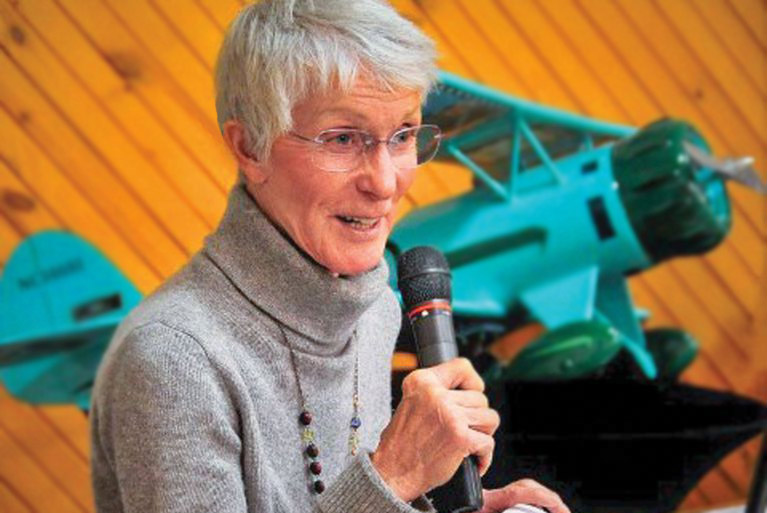 Martha Lunken learned to fly an Ercoupe in the early 1960s while attending college in Cincinnati. She became a flight instructor and operated a flying school at Cincinnati’s Lunken Airport for seven years. In 1980, she became an Aviation Safety Inspector with FAA’s Flight Standards Division at Chicago’s DuPage Airport. Later, she returned home and ran the FAA’s safety program in southern Ohio.

She has an ATP, airplane single and multi-engine land and sea, and a commercial hot air balloon rating. Martha is type rated in the Lockheed 18, DC-3 and SA-227 aircraft. She owns a 1956 Cessna 180 and has 14,000+ hours flight time. She is Contributing Editor at Flying Magazine. In 2016, Sporty’s published a book, Unusual Attitudes, which includes her favorite columns from Flying Magazine.